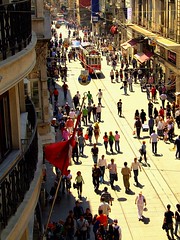 Hitchhiking in the middle of the night! Never had I really done it before. Always do I calculate my travel in such a way that I would be sure to arrive at my destination or to have my final ride, within the last hour after sunset, just before it really gets dark. But there I was, some hours before midnight at the Turkish border and 350km still to go for Istanbul…!

Some actually thought I had already made it when I wrote last week I finally arrived in Turkey. Nothing was less true. I still had over a thousand kilometers to go but Wednesday night at 3 a.m I arrived. Le Grand finale you could say. One of my most exciting hitchhiking adventures as I was traveling from NiÅ¡ in south Serbia to Istanbul, Turkey, through Bulgaria.

I was given rides by smoglers, salesmen, truckdrivers and refugees. It took me over 12 hours to drive 750km. A relatively good day with 60 kilometers an hour as half of my road were no highways, and half of trip was done with slow trucks. I crossed two borders in one trip, both by foot.

The first ride was given by my host who lives in a small village close to NiÅ¡ (more about NiÅ¡ soon). He dropped me on the highway to the Bulgarian border. And so my day started, with my sign that read “Istanbul”, dancing and singing, waiting for a car or truck, and … nothing came… no-one stopped for almost an hour.

After a while some police cars arrived. I had just rejected a short ride of only 10km, waiting and hoping for a better and longer ride as I was standing on a pretty good location, just before the highway would turn into a normal road. And all I saw was some police. 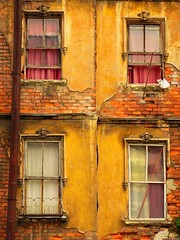 Quickly after though I was picked up by a local who was going to the border, to sell phones and subscriptions. I made my way on foot over the border, and got picked up by a smogler who travels daily to Sofia, leaving some money at the border to be let through. We could not really speak as he spoke only some words English and German, but we were driving again over 120 km an hour, so I thought I was making good progress as I arrived in Sofia at noon.

But less was true. In Sofia I was waiting for a long time, as most cars were going to another direction, to Hungary. No highway here, enough places for people to stop but nothing really happened for about an hour. Until a friendly person who spoke Russian to me for 15 minutes as I said privit (“hello”) to him when he said Rusko?, dropped me at the beginning of the highway where I was immidiately picked up by yet another Bulgarian.

My new driver was a Bulgarian truck-driver on his way to Teheran, Iran. He gave me my first lessons in Turkish. I learned how to introduce myself and to ask for a ride to my new city, as I was dropped some hours later on the middle of the highway again. I just missed some rides as I was taking a little break, and an hour later I was picked up by yet another truckdriver who brought his huge truck to a stanstill just next on the highway ignoring the people beeping their horns and waiting patiently for me.

He shared the most important public secret with me, just 10 kilometers further. All day I was hoping for a truck driver who was going to Istanbul but the main problem with hitchhing trucks is that they take long breakes every three hours and they travel slow. During my trip I had seen many Turkish truck-drivers at gasstation and rest-areas going to Istanbul but Today I was less lucky as I found very few and those I did find could not pick me up.

But there I was: in the walhalla of Turkish Truck drivers. As I was still only half-way the country, I had a very long way to go, and it was already getting towards six in the afternoon so I really needed a longer ride towards the Turkish border if I wanted to make it to Istanbul that same day.

I counted at least fifteen trucks with numberplates of Istanbul or Ankara and no-one of the drivers were sleeping. Instead they were all having some food in the special Turkish-Bulgarian restaurant where I was dropped. I entered and introduced myself in Turkish, and went outside to wait for the drivers to come out again.

The drivers came out one by one, but no-one was eager enough to let me get into their trucks. I was wondering why. They probably have seen enough hitchhikers, maybe enough experiences with this? I didn’t lose hope and after a short while, driver number ten said it was cool. We shared cherries in the truck and stories in half German and English and at 10 we arrived at the Bulgarian-Turkish border.

I got off to cross the border on foot. It really feels magic just to cross a border by walking. This really gives you the feeling of traveling. But as I could not possibly walk towards Istanbul I had to find a car as soon as possible. So at the first pasport control (there were four of them) I noticed a German car behind me and spoke to the driver. He said he was on his way to Iraq, and had no problems dropping me around Istanbul. Jackpot!

At this stage I was already very tired, I had not eaten much that day and had many talks, waiting, and so on behind me. But this one promised to be maybe the most interesting one. And indeed, as we drove off, after leaving some cash at the border for the stuff they were bringing with them I was explained his history, why he moved to Germany, the involvement of his family in the Saddam regime, how he lost a lot of money due to the wars, how he kept faith in God and Jesus, and so on.

At these moments you are made aware, yet again, that surrendering yourself to the absolute randomness of life can bring you tons of surprises and stories, and is one of the most amazing things while traveling.

He dropped in Istanbul at some random exit at 2 at night. There I was picked up by a taxi and got one of my craziest taxi-rides ever as I was offered drinks and smokes, receiving a fantastic tour through old neighboorhouds and small streets, just before I was dropped in front of my new temporary permanent home, right in the middle of the European center of Istanbul, 15 minutes from the main square Taksim. Time to relax now, time to evaluate, time to wrap-up, time to look forward.