Basically, when I saw a cyclist on the road, I asked him how that was called in Turkish. Since he did not see the cyclist, I made a peddling movement. His answer was feribot, and I replied I had three feribots. He first looked strange at me but then said he went by feribot to Ireland. I looked at him very impressed. “All the way from Istanbul?” And he said yes.

Some misunderstanding only get cleared out later. Now I finally know a feribot is not a bicycle but a boat, a ferryboat. And being in Istanbul makes you realise this even more. Thinking about Istanbul without seeing an image of a ferryboat seems to me very impossible now. They are indispensable as these boats are everywhere here and they bring you anywhere, for almost nothing.

Everyone uses these ferries: to go to work, to go back home, just to go to the other side to meet friends, to go to the Black Sea, or to go to one of the small islands just off the Asian coast, called the Princes Islands or in Turkish KÄ±zÄ±l Adalar. 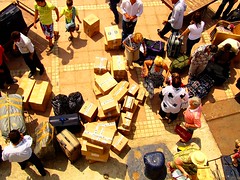 Going to the islands is what I did the other day with my mother. And we discovered the great escape outside the Istanbul heat, the cars and the chaos. After almost an hour on one of these boats, we found some real oases of peace, rest and nature.

There are nine of these islands, but you can get only to four by the ferryboat – the only ones that are also inhabited by people. We went to Burgazada, the second and smallest of the four islands, with historically a Greek flavor. You can walk around the place within just over an hour.

It is a very peaceful place as, to our major surprise, there are no cars. Everyone and everything at the island goes by foot, bike, donkey or horse-drawn carriages. A car-free zone in a semi-urban spot is just beautiful.

It gives a lot of atmosphere to it, and a lot of space to breath. Though it doesn’t mean you can freely walk on the road as if nothing is there to bother about. Running horses carrying people or goods in their carriage can jump in front of you before you even realise.

I wrote a report about the Islands but in Dutch. You can find there more photos as well. For those who don’t speak this funny language but do want to know more about the islands, you can also visit Time Out and Wikipedia.