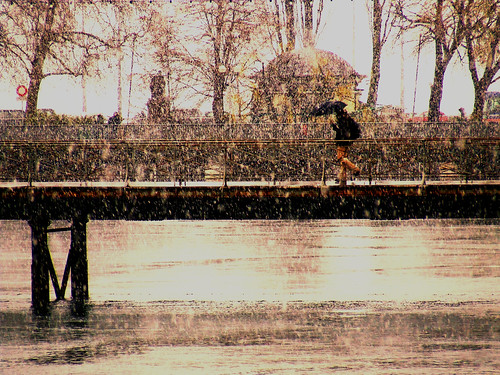 Rain. We have that a lot in Amsterdam. Recently winters haven’t been that cold as they used to be. Instead, there is just rain.

So it rained for the past days. Also during the weekend. But it didn’t seem to effect life negatively. I noticed almost everyone smiling, as I was walking in the rain to the Albert Cuyp market.

In “So long and thanks for all the fish” Rain-man is accompanied by rain. All the time. So he had described 231 different types of rain in his little notebook. (“And he didn’t like any of them…”).

During my twenty minute walk I went through types 47 to 51, “vertical light drizzle through to sharply slanting light to moderate drizzle freshening”. I only got wet a little.

I sang most of the time and many other people I could also hear singing or simply whistling. Rain, an underestimated source of cheerfulness?

“The clouds want to be near him, to love him, to water him”, Douglas Adams writes about Rain-man.

Mozart is alive and well. I went looking for him, and was shocked to find him really everywhere: at my breakfast-table staring at me from my cup of coffee and behind windows and on walls while I was cycling around town. We shared chocolates too and he even took me for a boat-ride.

I arrived in Salzburg some days ago, the birth-town of Mozart and a small city in Austria. It seems like Mozart, born just over 250 years ago, never died.

How the city and commercial interests have turned Mozart into plastic, goes beyond my imagination: a bridge, a street, a square, a house. And chocolates, dairy products and other food carry his name too.

When the city wrote a name-contest for a new panoramic boat the name came up first: Amadeus, the first name of Mozart.

I went looking for Mozart. I thought I would find him here in Salzburg. But all I found was a piece of plastic as any other brand. Salzburg? That’s Mozart! Nice for tourism maybe but I visited a city where I found a dead artist reborn in plastic.

And what about art? I thought while looking for Mozart. As I went to his birth-house the only art I could find were the last three letters of his name