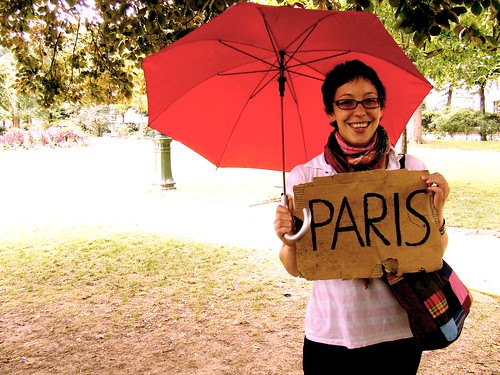 Camping on one of the most touristic hot-spots in Europe, waking up, looking up and seeing the Eiffel Tower enlightened by the beams of the early morning sun. The first European Hitchhiking Day was an amazing success.

I am generally not so easily thrilled by gatherings as they ordinarily tend to be much of the same, but this event was very remarkable. As a hitcher, to be among more than a hundred fellow-hitching-creatures is simply beyond imagining.

I hitched together with Julian, while we were followed by a camera-team from the Dutch news (video) for the first two rides.

We were dropped at the Eiffel Tower meeting point just 6 hours later. Yet another 6 hours further we were with a hundred people who all had hitched from different parts of Europe. We played games, exchanged stories, made music and danced into the night, while camping just in front of the Eiffel Tower. Aah, life. (more photos)