Lying in a tree, picking cherries. How wonderful life can be. One day earlier, in Belgrade, I didn’t even know I was going to be in this place as I was trying to hitch out of Serbia, to Macedonia. But there I was, a day before departure to Istanbul, in a cherrytree in the beautiful and extremely relaxed countryside of Serbia.

Before arriving in Istanbul, I had my last stop close to the city NiÅ¡, the third largest city in Serbia. I stayed with a family who hosted me through couchsurfing in a nice and self-build house on one of the hills around the city. Staying here turned out to be one of my more distinctive experiences during my four months of traveling.

First of all, I arrived in NiÅ¡ totally unexpected. In fact I was on my way to Skopje, the capital of Macedonia which is 200 km further south. However, while hitchhiking you surrender yourself to a higher level of randomness and you cannot always arrive at your destination. With over 20 hitchhiking days during these four months, this was nevertheless only the first time.

The road from Belgrade to NiÅ¡ is only 233 km but it took me ages. I left Belgrade at around 10 as I was dropped by my host at the highway, and I even woke up at 8. I arrived at NiÅ¡ at six in the afternoon. No more than 30 km per hour, my highest low-speed record.

I thought that Serbia, like all other Balkan countries, would be a great hitchhiking country but it was not. The people are less friendly on the road and there are not many cars driving very far in fact. My first hitch was an old hitchhiker himself who owns a bar. He dropped me at a minor exit, where I had to wait in the burning sun for at least 2 hours for a truck that was bringing me just 20 km further down the highway. But this was the ride I needed.

As a pretty common thing already in the Balkans, the truck-driver dropped me at the highway where I was lucky enough to find a quick ride with an older marijuana smoker driving 60 km per hours. He brought me to a rest-area where after an hour and a half I finally had a ride with a young guy driving a dutch Unilever van towards NiÅ¡. So I decided to stay in NiÅ¡.

Sometimes you just have to surrender yourself to the moments or the randomness, so I thought. Arriving in NiÅ¡ at six would give me enough time to contact people in that city and since it is not a very popular city, it shouldn’t be very hard to find a host. And who knows what comes up?

I was picked up by my new host several hours later, which gave me enough time to discover some nice elements of the city like the old fortress. Finally I was sitting in a good old Yugo car while we were driving through an old dirt road leading far up the hill some hours before midnight. Where was I going I was thinking for a moment.

But some time later I had a wonderful diner and the next day the couple invited me to their land to pick sherries. And there I was, one day before departure to Istanbul, in a cherrytree in the beautiful and extremely relaxed countryside of Serbia.

The same evening I was introduced to the rest of the family at a birthday party of a new young member of the family, while the whole neighboorhoud came for a visit, and later to the daughters of the family, when they showed me the cosy inner city of NiÅ¡. Just like my stay in Belgrade, it was one of my first real distinctive couchsurfing experiences where I was immediately part of the local culture. 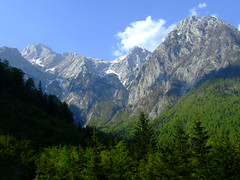 In Salzburg I stayed on the foot of a hill in the North-eastern part of the Alps, in Slovenia in the village Godic in a house on a hill, at the South-East part of the Alps. “When you leave Slovenia, you will remember it for its nature, not for its cities”, said a friend when we were walking through the mountains. END_OF_DOCUMENT_TOKEN_TO_BE_REPLACED

Each moment can give you a different view of what is around you. Rain, snow, sun or mist, an early sunrise, or a colorful sunset, they all bring you a different taste and view, a different mood and atmosphere. There is no moment better then any other; the scene is part of a constant change of light and other circumstances.

From where I am currently staying, it is only a 2 minute walk to be out of the city: no cars nor houses to bother me. So when I woke up early this morning, I took a hike in the surrounding nature. Just like the first day I was here, I woke up, saw the hills and decided to get on top of them. Pure beauty.

Because when I am discovering a new city the question of where did nature go is always on my mind. I feel missing it, I feel I am locked up somewhere. And I look for a river that streams through the city, a sea that borders it, a lake, the parks, hills, or simply the nature around the place.

In Salzburg this isn’t very hard. While I am sitting on a sunny balcony I have a first-line view on green hills, I hear birds and I feel a gentle sun. The view on the surrounding mountains with their white tops is very clear and the green on the hilltop in front of me, simply makes me jump out to reach for its top.

So after I jumped out of bed into the world, I found on my walk a little river bringing water down and giving life to the plants on its trail. I saw flowers waking up, a spider starting his day and a sun slowly evaporating yesterday’s rain. And I know for myself I am on the right track. I realise how to let it go, how to flow and  to make it grow.