It would be impossible to summarise Istanbul. There are only impressions, feelings and thoughts. No matter how many different perspectives you would acquire, there are simply too many different paths and lives here, to give a conclusion so sound that its people find their own stories back in it.

A city this huge just makes you realise there is yet more to explore. Never enough, there is always another corner and another road, another family and another party. Life of the Istanbul wo/man seems never-ending and no words can really grasp what this city is about.

Highlights, this is one of the few things what you might be able to offer. I recently made one small effort for this purpose. With the photo-essay “Live it and you will love it” I offer a viewpoint of what Istanbul-life for me is about, how I perceived the city, and how I see the people and culture here. I hope it offers you a good snapshot of Istanbul.

I find this country and this city one of the most social I have been so far. People meet each other everywhere and nobody seems lonely. True, there is a lot of poverty and people who just try to survive but somehow they always receive a lot of support from each other. Here I see people interacting with each other continuously. Meeting on the street, a random passer-by, somebody who waits for a bus or sits next to you on the boat, they are all excuses for a conversation.

And when they find out you are not from here, they become very curious and want to know where you are from, what you are doing here and how you like it. Imagine that in a city such as London, Amsterdam, Paris or Barcelona. No way that someone would even show the slightest interest in your life or imagine people talking in the bus or whilst queuing!

Here, though, the person you start talking to will respond with genuine interest, without hesitation. Imagine how it feels to have the freedom just to talk to anyone you like. What therefore might be one of the biggest paradoxes of this massive town with more than fifteen million people: there are no strangers here, only people you still have to meet. 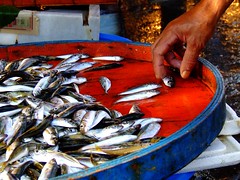 “Can I invite you for a tea? It is on the house”. While I am shooting some struggling half-dead fish at the fish-market next to the Galata bridge in Istanbul, my mom – who just arrived a couple of hours ago – is already invited to sit somewhere for some tea. The guy shows her his little piece of land and invites her to have a seat on one of the small chairs around the little tables.

They start a conversation about fish, mixing English, German and Dutch. The guy is showing my mom proudly his kitchen and explains her how he could prepare her the sardines I am shooting. “But they are still alive”, my mom says and adds that she has no appetite yet. “You can always come back tomorrow for the fish”, he smiles back to her, “but the tea is still on the house”, END_OF_DOCUMENT_TOKEN_TO_BE_REPLACED

Lying in a tree, picking cherries. How wonderful life can be. One day earlier, in Belgrade, I didn’t even know I was going to be in this place as I was trying to hitch out of Serbia, to Macedonia. But there I was, a day before departure to Istanbul, in a cherrytree in the beautiful and extremely relaxed countryside of Serbia.

Before arriving in Istanbul, I had my last stop close to the city NiÅ¡, the third largest city in Serbia. I stayed with a family who hosted me through couchsurfing in a nice and self-build house on one of the hills around the city. Staying here turned out to be one of my more distinctive experiences during my four months of traveling.

First of all, I arrived in NiÅ¡ totally unexpected. In fact I was on my way to Skopje, the capital of Macedonia which is 200 km further south. However, while hitchhiking you surrender yourself to a higher level of randomness and you cannot always arrive at your destination. With over 20 hitchhiking days during these four months, this was nevertheless only the first time.

The road from Belgrade to NiÅ¡ is only 233 km but it took me ages. I left Belgrade at around 10 as I was dropped by my host at the highway, and I even woke up at 8. I arrived at NiÅ¡ at six in the afternoon. No more than 30 km per hour, my highest low-speed record.

I thought that Serbia, like all other Balkan countries, would be a great hitchhiking country but it was not. The people are less friendly on the road and there are not many cars driving very far in fact. My first hitch was an old hitchhiker himself who owns a bar. He dropped me at a minor exit, where I had to wait in the burning sun for at least 2 hours for a truck that was bringing me just 20 km further down the highway. But this was the ride I needed.

As a pretty common thing already in the Balkans, the truck-driver dropped me at the highway where I was lucky enough to find a quick ride with an older marijuana smoker driving 60 km per hours. He brought me to a rest-area where after an hour and a half I finally had a ride with a young guy driving a dutch Unilever van towards NiÅ¡. So I decided to stay in NiÅ¡.

Sometimes you just have to surrender yourself to the moments or the randomness, so I thought. Arriving in NiÅ¡ at six would give me enough time to contact people in that city and since it is not a very popular city, it shouldn’t be very hard to find a host. And who knows what comes up?

I was picked up by my new host several hours later, which gave me enough time to discover some nice elements of the city like the old fortress. Finally I was sitting in a good old Yugo car while we were driving through an old dirt road leading far up the hill some hours before midnight. Where was I going I was thinking for a moment.

But some time later I had a wonderful diner and the next day the couple invited me to their land to pick sherries. And there I was, one day before departure to Istanbul, in a cherrytree in the beautiful and extremely relaxed countryside of Serbia.

The same evening I was introduced to the rest of the family at a birthday party of a new young member of the family, while the whole neighboorhoud came for a visit, and later to the daughters of the family, when they showed me the cosy inner city of NiÅ¡. Just like my stay in Belgrade, it was one of my first real distinctive couchsurfing experiences where I was immediately part of the local culture.