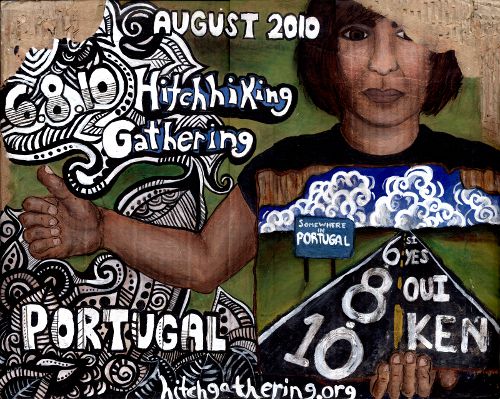 Hundred-and-fifty people and amazing fun in Paris two years ago, just over a hundred in Odesa last year (a lot harder to get to, see video) and non-stop hitching adventures. The ones gathered are hitchhikers, first-timers and hardcore travelers. Nice reunions of friends and contacts, of people who share-alike.

Both times I helped (un)organising the events. And this year again I do my part, setting up the website hitchgathering.org and helping out with communications and outreach.

I am not so much of a scouter and both last years the location of where to meet was pretty much left to the last minute, literally. And again for this year, we have no clue yet where to meet, except for â€œsomewhereâ€ in Portugal. Fantastic, and perfectly alligned with a hitchhiking attitude.

It ain’t easy for people to embark on quite a big trip to Portugal if they never hitched before, and especially if people have to hitch through Spain (which can be a bit of an adventure). So there is a challenge for many of us to inspire and motivate them.